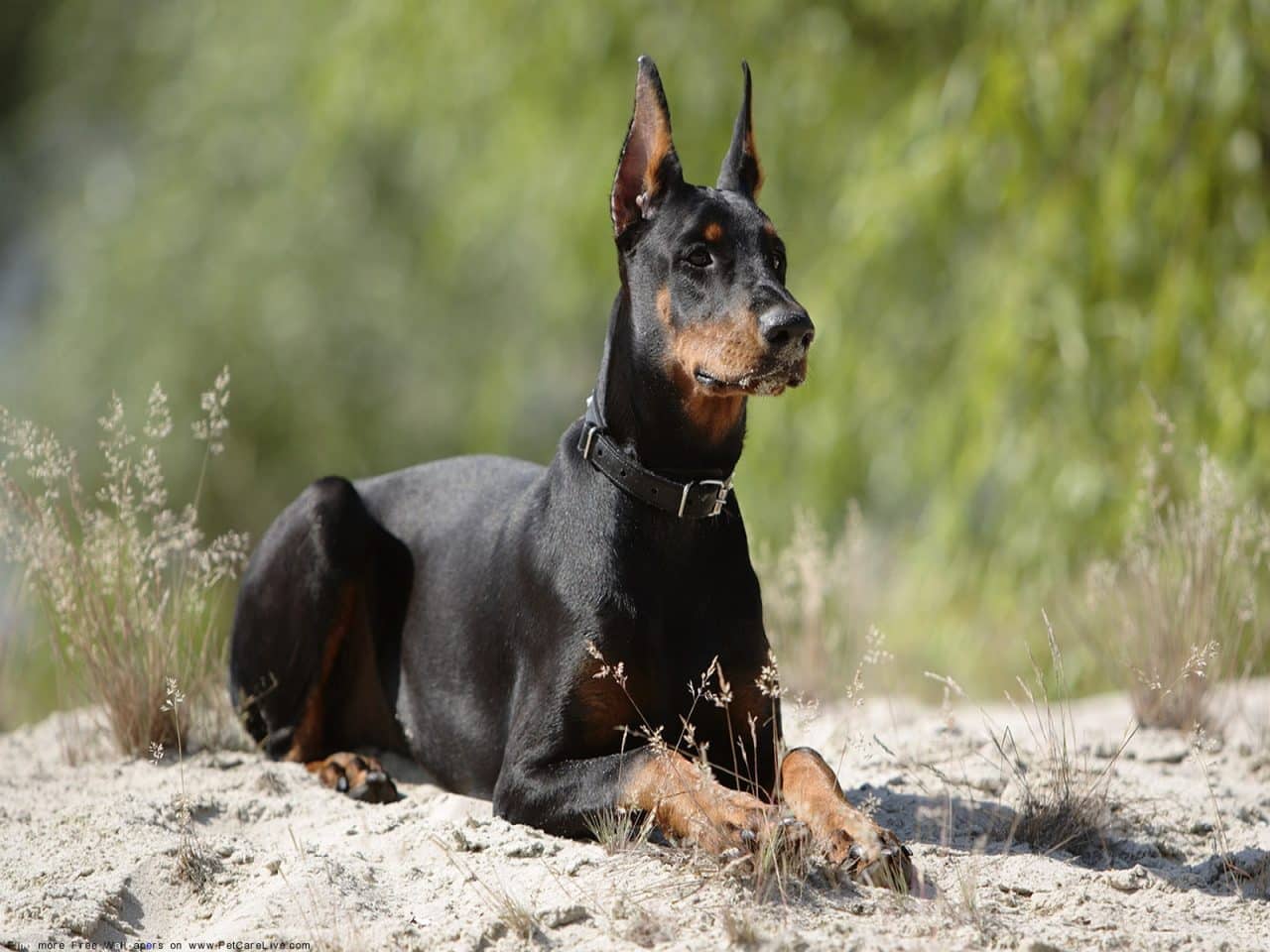 A powerful and muscular member of the Working Group developed for police and military work and to be a protector and companion in the home. The breed originated in Germany and quickly gained popularity in other countries for its courage, intelligence, and loyalty. 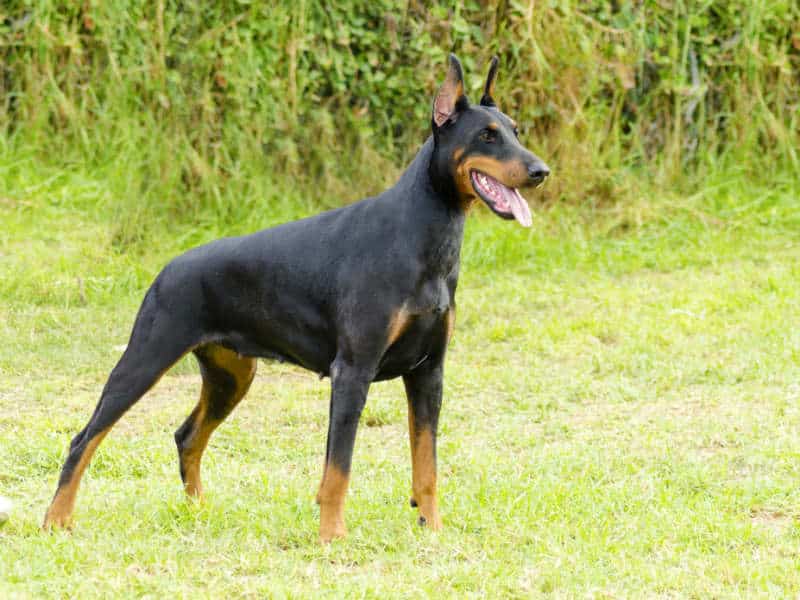 The Doberman Pinscher is named for Karl Friedrich Louis Dobermann, who played a key role in the development of the breed in the late 1800s. Initially, the dogs were called “Dobermann-Pinschers” in Germany, but later the name was shortened to simply “Dobermann” because the “Pinscher,” being the German word for terrier, was no longer considered appropriate. The British also dropped the Pinscher several years later, but it continues in North America. 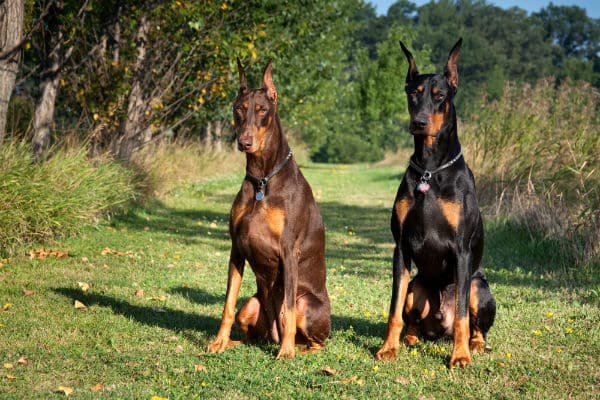 A combination of dog breeds went into developing the Doberman, but the exact mixture isn’t known. It’s likely a couple of English breeds, as well as several German breeds, including the German Pinscher, went into his creation. The Rottweiler and Weimaraner were also part of the Doberman’s ancestry. The guarding and herding breeds in the Doberman’s heritage gave him great intelligence, and the Black and Tan Manchester terrier in the mix imbued him with lightning-fast reactions. It’s worth noting that the Miniature Pinscher is not a miniature Doberman, and in fact, the two breeds aren’t related.

During World War II, Dobermans served the U.S. Marine Corps in their war dogs program. The dogs were used throughout the South Pacific to lead patrols through the hot dense jungle, guard troops at night while they slept, and give warnings of hidden enemy combatants waiting to carry out an ambush. Many of the dogs survived to return home to civilian families, but others made the ultimate sacrifice and are buried in the National War Dog Cemetery at Naval Base Guam.

Dobermans are elegant looking, medium-sized, square-shaped dogs with boundless endurance and speed. Males are 26-28 inches high at the top of the shoulder and females are 24-26 inches. The weight of this compactly built dog ranges from 60-100 pounds. They are energetic and determined, and as such require a great deal of daily exercise. 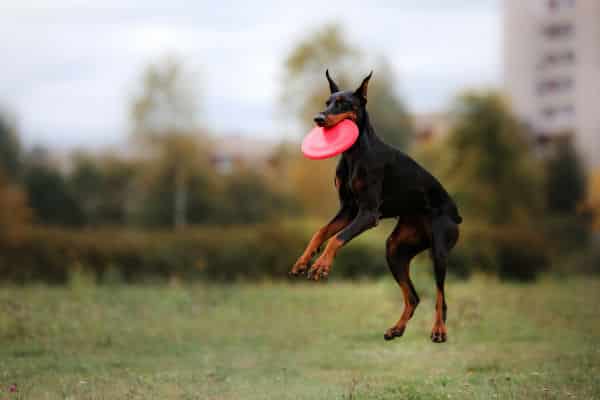 The smooth-haired black, red, blue, or fawn colored coat is short, thick, hard, and lies close to the body. There are sharply defined rust markings found above each eye, on the muzzle, throat and fore chest, on all the legs and feet, and below the tail.

Famous for their guarding ability, Dobermans are perceptive companions with great intuition. They have a remarkable ability to sense threats and can accurately determine who is a friend and who is not. But when trained and socialized correctly, they are also fun-loving dogs with huge hearts, a great sense of humor, and a desire to stick close to their humans. 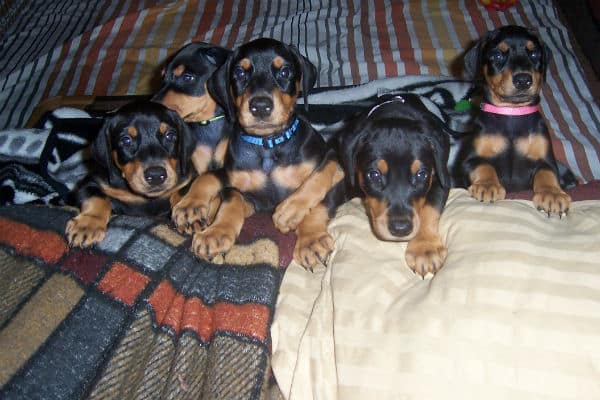 Dobermans are an incredibly versatile breed. They are used to help humans as search and rescue dogs, therapy dogs, and other forms of service dogs. But they also make great partners for a wide range of dog sports, including agility, dock diving, fly ball, obedience, rally, and Schutzhund. Even sports not traditionally associated with Dobermans, like lure coursing, tracking, or carting, are worth giving a try with this adaptable dog.