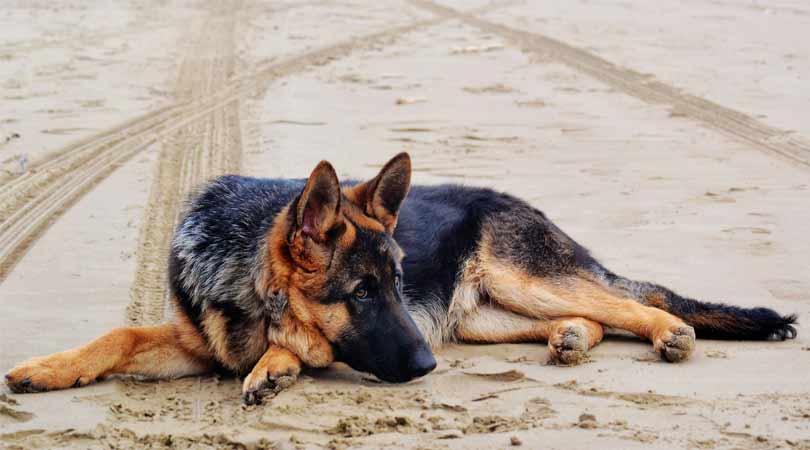 You know the phrase “dogs are man’s best friends,” right? Well, while we’ve seen a lot of dogs display loyalty that’s beyond us, sometimes it can be a little bit different.

First, What’s The Personality Of A German Shepherd?

German Shepherds are probably best known to be obedient, courageous, and reliable service dogs of search-and-rescue units and police K-9s. Plus, they are often the common breed when it comes to guide dogs for the disabled.

This dog breed is also valued for its focus, loyalty, intelligence, and tenacity. And, they are also often sought as protectors and guard dogs. Nonetheless, while they are naturally a herding breed, German Shepherds can make loving and outstanding family companions.

The personality of a German Shepherd is quite distinct and marked with a fearless and direct expression. Also, they come with a reluctance to build indiscriminate friendships and an obvious self-confidence. Also, they tend to be aloof and indifferent to strangers. But, once they get to know you, they give you a life-long devotion.

See Also  25 Celebrities with their Bulldogs

Now, What Are The Behavioral Traits Of A German Shepherd?

German Shepherds are generally protective by nature. As a result, they make fantastic police dogs and guard dogs.

Once a German Shepherd bonds with you, it may become really protective when you’re strangers approach you, or even friends. Sometimes, this protectiveness may be seen as appropriate, and other times, it becomes more of aggressiveness. However, it all depends on the situation.

If you own a German Shepherd, it is essential that you train it to recognize guests that are welcome and those that are not. They may bark at familiar friends or strangers approaching your home, but with appropriate training and socialization from an early age, they can become well-integrated into a regular social routine.

According to reputable trainers and breeders, German Shepherd aggressiveness or usual shyness are usually caused by either poor training, poor breeding, or both. So, if you own a German Shepherd or you’re thinking of getting one, then you should explore its background and stick to a proper training and socialization protocol.

With this dog breed, you can get years of faithful service and loyal companionship. Hence, they need proper socializing and training because of their poise, self-confidence, trainability, and size.

So, we’ve often heard touching and beautiful stories of people rescuing dogs and giving them affection, care, family, and a home. But, what’s even more attention-grabbing and touching is stories of dogs going the extra mile to save someone’s life, whether it’s their owner or a stranger.

That said, let’s look at some German Shepherd stories where they were the heroes.

If you’re talking about heroic acts by a German Shepherd, then Noah just has to be mentioned. The dog went out with his family, and his owner stopped by a store to get a dog collar. And the owner’s wife, Diondra, and three kids were in their car in the parking lot. Then suddenly, there was an incident in the parking lot with two groups exchanging gunfire.

With bullets through car windows, Noah ran inside the car to save his four family members where a bullet hits him in the neck. According to Diondra, the bullet was directed at her, but the Noah took it for her.

But, that’s not where the story ends.

The dog, with a bullet wound in its neck, ran after the gunman, where he later took his last breath.

Another heroic German Shepherd story is where a dog, Rambo, gave his life when he saw that his owner had been hit by lightning while hiking Mount Bierstadt with a group of people.

As his owner winded up unconscious from the lightning, Rambo touched him to share some of the electric charges.

We’ve gone through a few instances where German Shepherds showed loyalty and even gave their lives for their owners. However, there are some cases where this breed of dogs becomes unusually aggressive.

Let’s look at some these cases then, shall we?

Now, this is a story of a German Shepherd named Wolf that will be destroyed after terribly attacking a young family and even biting the thigh of a man who came to help.

The huge five-year-old dog was ordered by a Sheriff to be put down following a guilty plea in the court to the dog being alarmingly out of control.

According to his owner, Wolf could be viciously overprotective of her, and that day, it got out of control.

On the said day in March, Wolf lunged at its owner’s neighbor and her children and tried to bite the mum on the head. While a neighbor tried to rescue the children, the dog also lynched him and bit his thigh.

This is a case of the lead singer of a local band being attacked by a German Shepherd in Penn Township.

The lead singer, Amy Demi, who is a member of the band Switch and also a UPS driver, was delivering a package on August 28 when she was mauled, attacked, and bitten by one or two German Shepherds own by the family.

The dogs caused serious injuries including puncture wounds and deep cuts, especially on her legs. However, Demi was rushed to the hospital to receive treatment.

German Shepherds are an amazing breed of dogs. While they can display extreme loyalty and protectiveness for their owners, it can sometimes get a bit aggressive, leading to someone getting hurt.

There have been reports of these dogs attacking people. However, there are more touching and heartfelt stories of German Shepherds saving the life of their owners and even strangers.

The behavior of German Shepherds primarily depends on how appropriately they are trained.