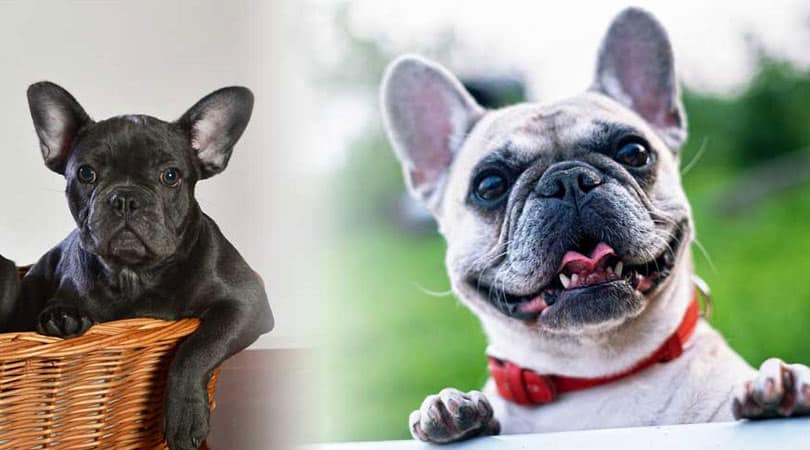 French Bulldog breed origin is not well known before the second half of the 18th century. The dog has a history of hard-working dogs in England, but there is no information from a reliable source about its origin. It’s a long story, but certainly, French Bulldog run down in history as a universal dog. French bulldog may perhaps descend at least partially from the English Bulldog, probably from one of the toy dogs that were common in England between the 1850s and 1860s, especially among lace makers in Nottingham region of central England.

When the Industrial Revolution shut down a lot of small craft shops like lace-making. Lace-makers then migrated to northern France and took their small bulldogs with them. It was easier to take care of their dogs in simple weaver’s homes. Besides that, these dogs were good rat hunters. The little Bulldogs rapidly became very common in France. Where they crossed with other local breeds until the French Bulldog was developed with its distinctive “bat” ear.

These dogs referred to as Bouledogue Francais. Created a furor in Paris, and became a star of the working class Parisians society. Its body structure, small size. And its charming personality soon made this small petite Boule the adorable of flat-faced breed fanciers. As this new breed gained popularity in France, they soon gained favor with the ladies of the night.

French bulldogs are adorable and they will make you laugh. Frenchie’s are intelligent dogs with a great sense of humor and a stubborn streak. They have been bred for centuries as a companion dog. And they are very fond of people and became mostly attached to their family. In fact, they sometimes become a bit too attached. That makes them not a better option for someone who will be away for long hours daily. This means Frenchie cannot live in the garage or backyard, but only indoor as a member of the family. This is especially true since, like all brachycephalic breeds. They have difficulty regulating their body temperature and needs to live in a climate controlled environment.

They do not require much exercise and are usually mild-mannered. But they can bark to alert their owners when a stranger approaches their territory.

The sometimes refer to as frog dog due to their wide round face. And their unique sitting style, with hind legs spread out. The name “clown dog” is used due to the dog silly and loving nature. It is considered as clowns in the dog’s world. Their quiet nature makes them an excellent choice for apartment dogs, including their attitude towards barking.

Like other breeds of companion dogs, the French bulldog also needs close interaction with humans. Therefore, they should not be left alone for more than a few hours. Otherwise, they will suffer separation anxiety. You should be careful of this particularly when the dog is young, but this problem also occurs in maturity.

Frenchie can be manipulative and very stubborn. Through absolute consistency, you need to show them that you mean what you say. Food is an excellent motivator for this dog. However, it often leads to a fat dog who obeys only when you are weaving a treat. I recommend a more logical training technique.

The personality of the French bulldogs makes them suitable as human companions. They can be best described as friendly to their human owner. And to a very extensive degree, they are also found to be relatively happy and content dogs. These dogs must be monitored when playing with children because they can be exuberant and excited sometimes. Most of the flat-faced breed’s dogs have some difficulty with their breathing. which is why they cannot be expected to live outdoors or stay extensively in warm or hot places.

Even though French bulldog carries sad expression, they are fun and entertaining. They are usually very calm and friendly in nature. However, they still need frequent attention and care, which makes them a lovely indoor pet. In addition, French bulldogs puppies are good therapy dogs, especially for elderly people.

Frenchie’s has a snooping and alert expression that is enhanced by their bat ears. They are different from the English Bulldog in their movement, which is free, unrestricted and has a good drive and reaches. Their slack soft skin around the head and shoulders form wrinkled. Frenchie is a sturdy and entertaining domestic dog, as well as a strong lapdog.

By sharing many of the characteristics of their predecessors, the French Bulldog breed is characterized by a wide body and heavy-boned. A muscular structure, a large square head, and a short fine coat. Their coat comes in various colors including the fawn, brindle, black, and white.

They have the tendency to overweight. This is one reason they don’t exercise for a long time and can be okay with just one walk daily. Monitoring your dog when walking or exercising can be a good idea. Since they get easily tired and can have some trouble breathing when exercised too much. Frenchie bodies are not built to cross springs or water channels. As swimming is another sport not fitting to these dogs.

Due to its terrier lineage, the French bulldogs can sometimes be aggressive. And this is the reason you should be cautious when approaching a French bulldog that doesn’t know you.

The life expectancy of the French bulldog is between 10 and 12 years. This compares with the average age of most of the thoroughbred dogs (10 to 13 years old). And most breeds are similar in size. Potential genetic disorders and defects are commonly found, but not certainly found in the French Bulldog. The following are the common health issues peculiar to Frenchie’s. Remember not all French Bulldog will get all or any of these sicknesses. However, it’s important to be conscious of them especially if you are considering this breed.

Is a genetic disorder in which the femur does not fit comfortably into the socket of the hip joint. Hip dysplasia can occur with or without medical signs. Some pooches show pain and limping on one or both hind legs. As the French Bulldog puppy advances in age, arthritis can develop. The X-ray examination of hip dysplasia is performed by the Orthopedic Animal Institute. Or the Hip Improvement Program at the University of Pennsylvania. Dogs with this disorder should not be bred.

The condition occurs in dogs with narrowed nostrils, short heads, elongated and soft palate. They have obstructed airway to varying degrees. And can cause anything from noisy breathing to difficulty in breathing and can lead to complete rupture of the airways. Dogs with a syndrome similar to brachycephalic are usually seedlings and snoring. Treatment varies depending on the severity of the condition. But includes oxygen therapy and surgery to enlarge the nasal passages or shorten the palates.

The three main common allergies problems in dogs are food-based allergies. This is treated by the process of removing certain food from the dog diet. Contact allergies are caused by a reaction to the topical substance like dog bedding, shampoos. With other chemicals, and treated by eliminating the cause of allergies. Inhaled allergies, caused by airborne allergens, such as pollen, dust, and mold. The medication for the treatment of inhaled allergies depends on the severity of the sensitivity. It is important to keep in mind that ear infections often accompany allergies caused by inhalation.

this is a deformation of one or more vertebrae that give it a wedge or triangle shape. This deformity can occur on its own or with other vertebral deformities. The hemivertebra can cause problems or give pressure to the spinal cord. This can cause pain, weakness, and paralysis. There is no cure for the disease unless there is spinal cord pressure.

French Bulldog breed can also develop eye complications and spine conditions. Most French Bulldog females need a cesarean section and veterinary supervision when giving birth. Frenchie puppies have large heads. And may find it difficult to pass through their mother’s birth canal, the possibility of stocking it is great. Since large heads are characterized by many Bulldog breeds. This may be the reason why more and more cesareans are performed these days compared to before.

Frenchie may not look too agile, but they are an amazingly muscular dog that needs to be active to maintain fitness. Physical activity is important for their muscle, bone and joints development. But it is also an important source of mental stimulation. A good exercise Frenchie will be happier, calmer and easy to discipline at home. Giving your dog a good enough workout is one of the things you can do for him.

They are a wonderful companion. And always happy to snuggle up to their owners at night after they are well feed and exercise. They are a social animal and should not be left alone for long periods. Some French Bulldogs exhibit signs of being territorial. If you have a kitten and you are bringing a Frenchie home. You should closely monitor their interactions until they get used to each other. They are free thinkers and, sometimes, have their own ideas about what they want to do. For this reason, Franchie is not the easiest breeds to train. But they are alert and bright, so you will be successful if you persevere.

The best thing about Frenchie is that they have a low maintenance fur that is a short coat, easy to groom. You will need to brush Frenchie’s coat at least once a week. Use a good quality bristled brush to help eradicate any loose hair. If desired, you clean it with a damp cloth to remove dirt or debris. The degree which the dog sheds may vary. If you discover that your dog shed too much, you should increase the grooming sessions several times a week. This will go a long way in protecting your home from an influx of dog hairs!

You must pay special attention to the soft folds of the skin on the dog face. Though it is not wrinkled or folded like other breeds. It still needs these areas to remain clean and dry to prevent a bacterial infection from developing. Once a while you should take a damp cloth and clean the area of the face well. You can use a cotton bud to access the folds of the skin. Dry the area well afterward. Sometimes, you may need to give your Frenchie a bath, especially if he was rolling in the mud or if he starts to smell.

When buying French bulldogs puppy, check if both parents have been predisposed to any hereditary health problem. The breeder or the seller who is dealing with the sale of the French Bulldog should confirm it. For a good sale quality French bulldog puppies. Ensure the breeder or dealer is certified by the standards organizations of the breed.

Don’t forget that owning a Bulldog is a lifelong commitment. You must have a good knowledge of the breed. In order to get all the ideas, you need to find a Bulldog puppy for sale. The main points are the responsible breeding and suitable puppy care at a good bulldog price. Simply find out from the dealer how they puppy have been cared for. This will help you know its diet and have more information about how to care for your new French bulldog puppy.